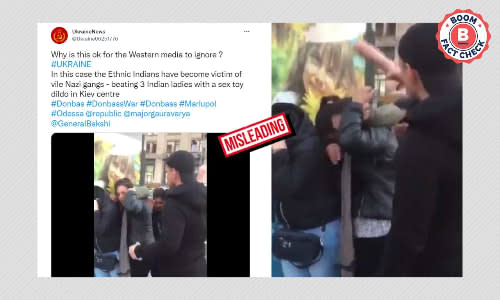 By Archis Chowdhury A video showing a group of women being assaulted by a man in a black hoodie with a sex toy and pepper spray is being shared on social media with the claim that it shows a Nazi gang attacking Indians in Ukraine. BOOM found this claim to be misleading; the video shows an attack on a group of Roma women by a man named Maxym Yarosh, and does not show an attack on Indians in Ukraine. BOOM also collaborated with Brussels-based fact-checker Brecht Castel, whose investigation revealed that Yarosh is a far-right militant with ties to the Azov Regiment – a unit of the National Guard …